Did you know that April 7 is National Beer Day? A day to kick back and relax with a cold one and celebrate the beginning of warmer months. According to Statista, revenue for the alcoholic beverage market will amount to over $284 billion in 2022, growing 7.5% over 2021. Within this category, the largest segment by market volume is beer.

With the US adding almost three million potential consumers each year (those turning 21), alcohol consumption is on the rise. In 2020, the federal excise tax relief program (referred to as the Craft Beverage Modernization and Tax Reform Act) for both domestic and foreign qualifying producers was passed, resulting in an explosion in the market and creating opportunities for new brands to enter into the mix. New categories such as hard seltzer, hard kombucha and canned cocktails also emerged in the past few years, enhancing the variety of alcoholic beverages available.

For any advertisers who want to target alcoholic beverage drinkers, here are three things to know:

1. National Beer Day Is A Real Thing: You might think that National Beer Day is just for consumers. However, on April 7, beer brands get their due share of voice and place a ton of linear TV ads — accounting for twice the ad volume of spirits and four times that of hard seltzers. Viewers see beer ads 2-3x more frequently than other alcoholic beverages. However, heavy linear TV viewers (averaging 6 hours of linear viewing per day) are inundated with alcohol ads, with a frequency of ~90 per month. Conversely, light linear TV viewers see fewer than 10 ads per month. This is where frequency caps, available through brands like LG Ads Solutions, can help your brand reach relevant audiences at optimum frequencies, including those who watch fewer hours of TV.

2. Alcoholic Beverage Advertisers Gotta Love Sports!: Based on our data, sports content, including live sports, is the top place to find audiences interested in alcoholic beverages. Live tune-in to sports is accessible not only through linear TV, but also through streaming, network platforms and other apps. Movies, comedy, games and reality shows are other top genres that resonate with alcoholic beverage audiences. To break through the sports clutter (which is typically expensive), brands can use ACR technology to target sports fans across different shows and networks, making for more effective and efficient advertising.

3. Smaller Budgets Barely Make A Dent In Linear TV Advertising: New and upcoming brands, or those with smaller TV budgets, are entirely outnumbered and obscured by brands that have a heavier wallet. In the beer, liquor and hard seltzer categories, the top two brands take up a significant chunk of the share of voice, while the bottom two brands account for less than one-third. OEMs that supply CTV ad inventory can help brands with smaller budgets bring in a higher SOV and reach relevant audiences by conquesting competitors. 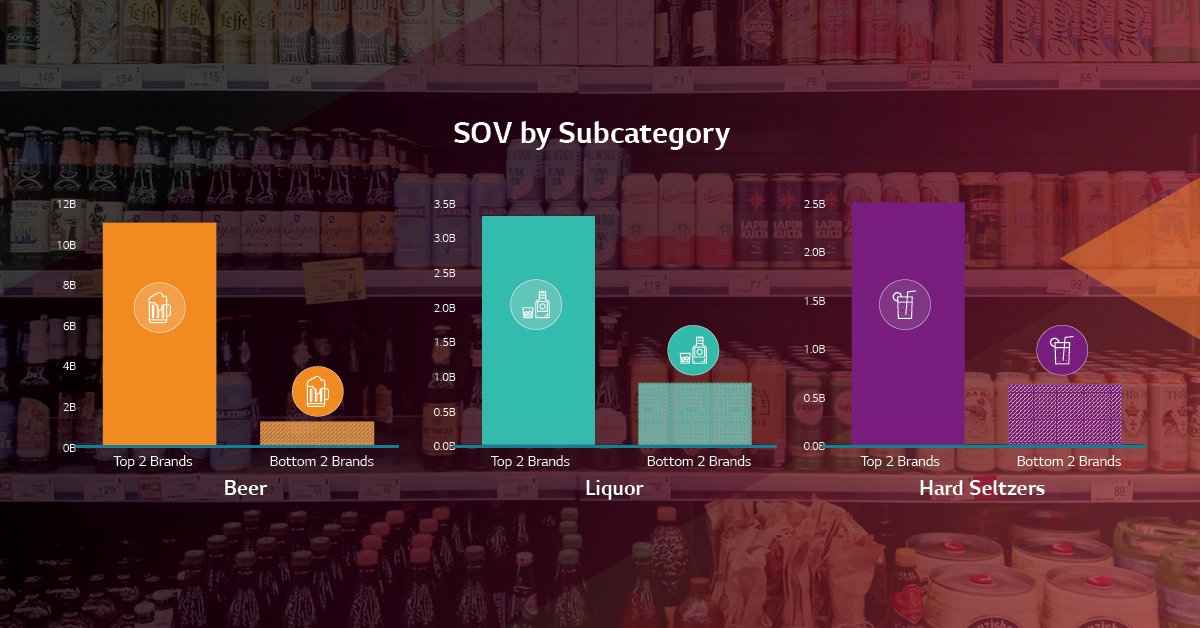 With our ACR technology and granular targeting capabilities, LG Ad Solutions can help you get the most out of your media buy during this year’s March Madness.

1. Know Your Competition: Food and beverage, retail and auto advertisers go big when it comes to spending on traditional linear TV during March Madness. To break through the clutter, you can double-up your efforts and look to CTV advertising to reach specific, highly relevant audiences. LG Ad Solutions native ads are a great way to take ownership of the TV and interact with your target audience at multiple touch points throughout the TV viewing experience.

3. Cross-Platform Viewership Is On The Rise: According to MiQ, almost a quarter of March Madness viewers who watched the games live were also active on other devices. 40% of impressions generated on second screens were on a mobile phone. With our precision targeting, LG Ad Solutions can reach audiences incremental to your linear schedule, across multiple screens to reinforce your brand message and keep it top of mind for all of your consumers. Additionally, as with all live sports, viewership waxes and wanes depending on which teams qualify and how interesting the pairings are. CTV, coupled with cross-screen is the perfect last-minute strategy to employ once the brackets are set.

4. March Madness Viewers Have An 80%+ Overlap With Comedy, Movies and News Genres But Not Necessarily Other Basketball Games: You don’t necessarily have to reach March Madness viewers through the NCAA tournament. There are multiple (less expensive) places across TV where these audiences can be found including across comedy, movies and news genres. Don’t assume that March Madness fans are generic basketball fans. Last year, 40% of March Madness viewers did not tune-in to an NBA game in the three months preceding the tournament. LG Ad Solutions can help you pinpoint exactly where March Madness audiences are across different platforms, networks and shows. Whether it is during, before or after the season, our ACR data allows you to target viewers more effectively. 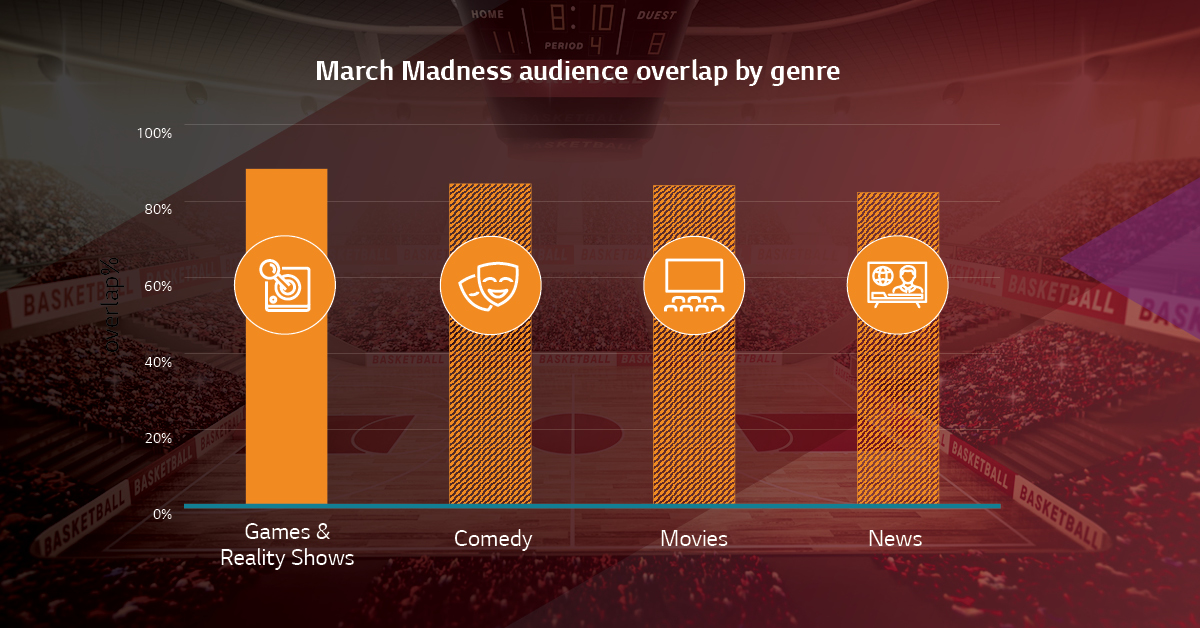 The second-to-last round of the NCAA Men’s Basketball Tournament took place over the weekend. The Baylor Bears and Gonzaga Bulldogs came in hot and won their respective games, placing them head-to-head in the championship game.

Let’s check if the tune-in for the games were as strong as both teams’ winning strategy.

Baylor Bears win the game and the tune-in battle 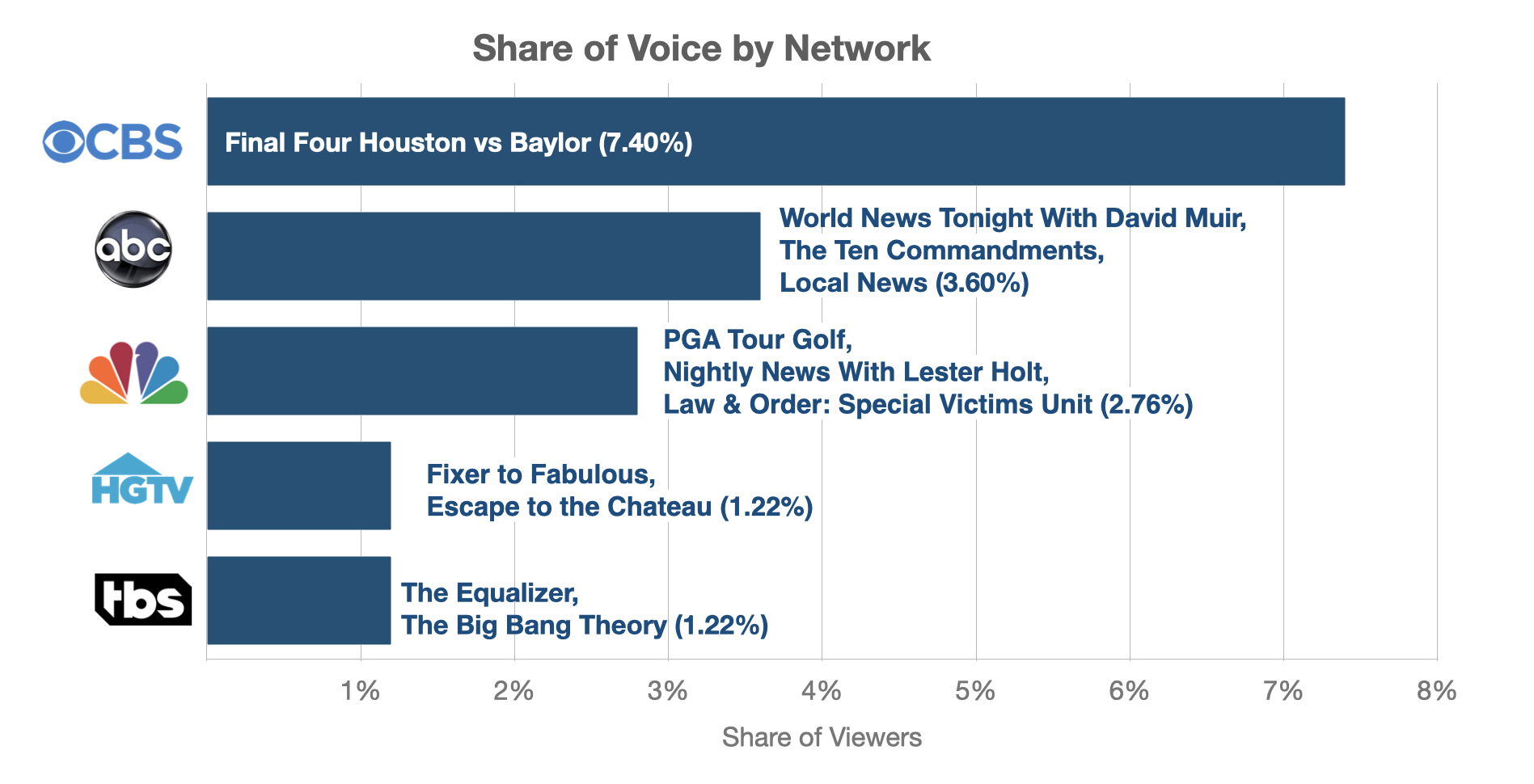 Both games resulted in the highest share of voice for CBS at 7.40% and 10.85% for the Houston vs Baylor and UCLA vs Gonzaga games respectively. Gonzaga games have been highly watched and their Final Four game was very close, resulting in a higher share of voice. The winning 3-point shot was hit just as the buzzer to end the game went off. CBS has been leading the share of active viewership when telecasting March Madness games.

CBS held on to viewers for the first and second game 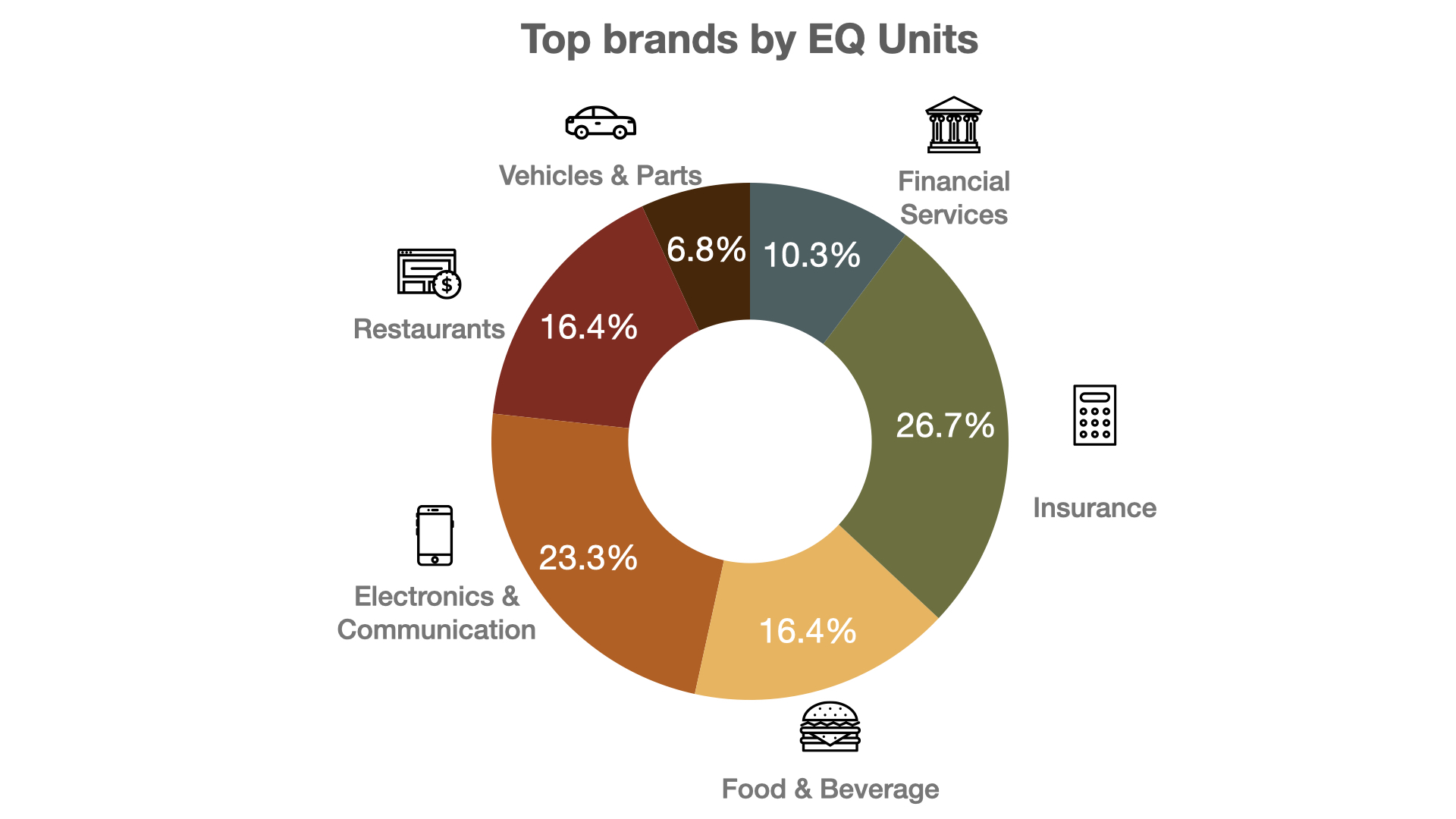 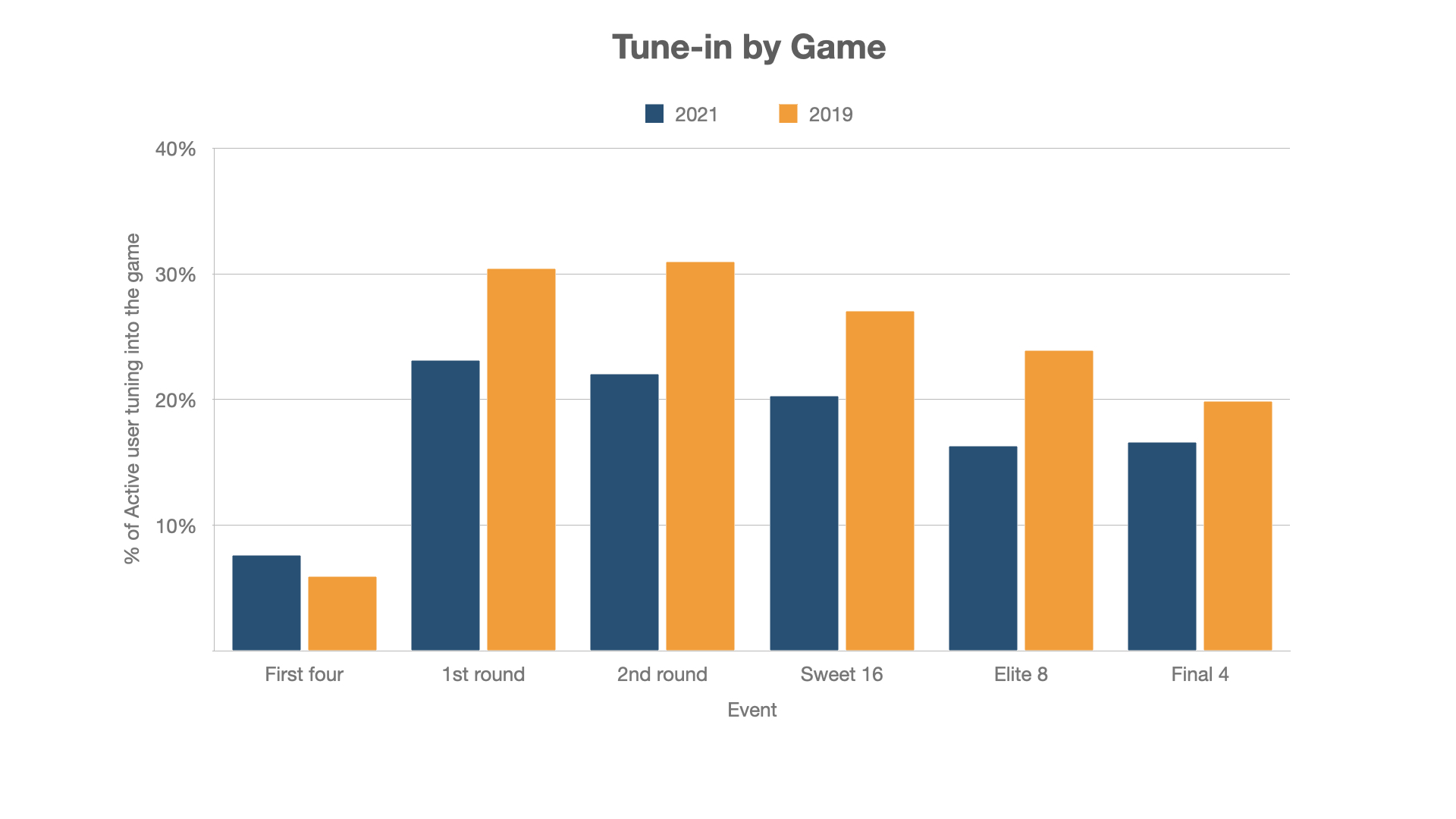 One of the first hybrid (in-person) sporting events for 2021, after a year of no live sports, the First Four games of March Madness 2021, saw a higher tune-in than 2019. However, for the remaining games, 2019 continued to be in the top spot.

March Madness is on, creating a ripple of fervor among college-basketball-starved fans. The event was one of the first few of the year to have in-person viewing (up to 25% capacity). Similar to the NBA bubble in 2020, all games are being held entirely in Indiana to avoid the need for travel and subsequent exposure.

Let’s dive into the category and brand-level performance of the ads featured during the Sweet 16 round of the NCAA Men’s Basketball tournament. 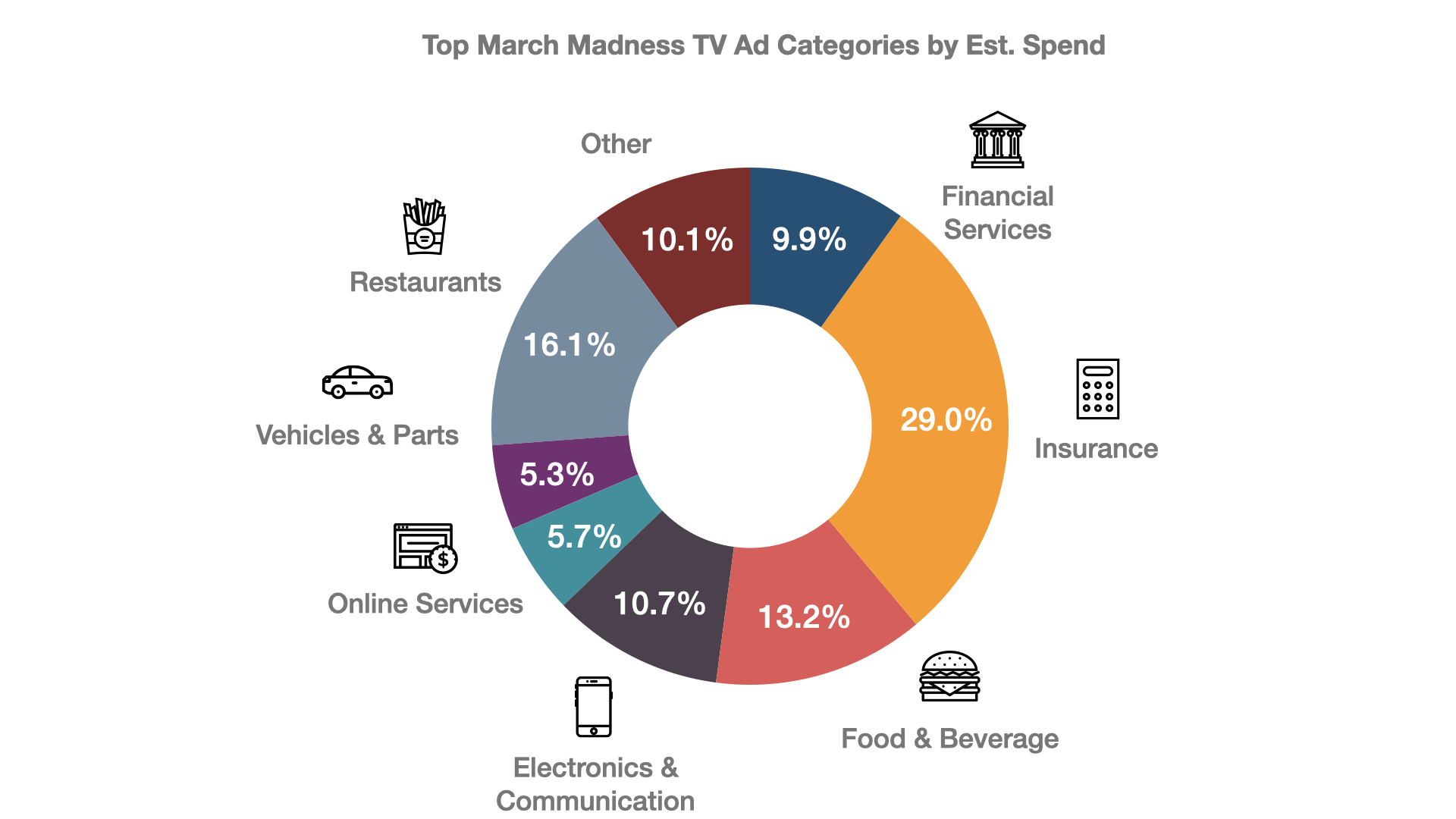 In the Sweet 16 rounds of March Madness, the insurance category sees the highest spend by industry, followed by the restaurant industry and food & beverage.

Progressive spent about $866K during the Sweet 16 round of the tournament, just taking the lead from GEICO who came in at ~$769K.

Final scores and spends will be in after the ‘Final Four’ in the next few days. Stay tuned for the naming of the MVPs by total ad spend.

Take a look at the results of the following bracket, the Elite Eight here.