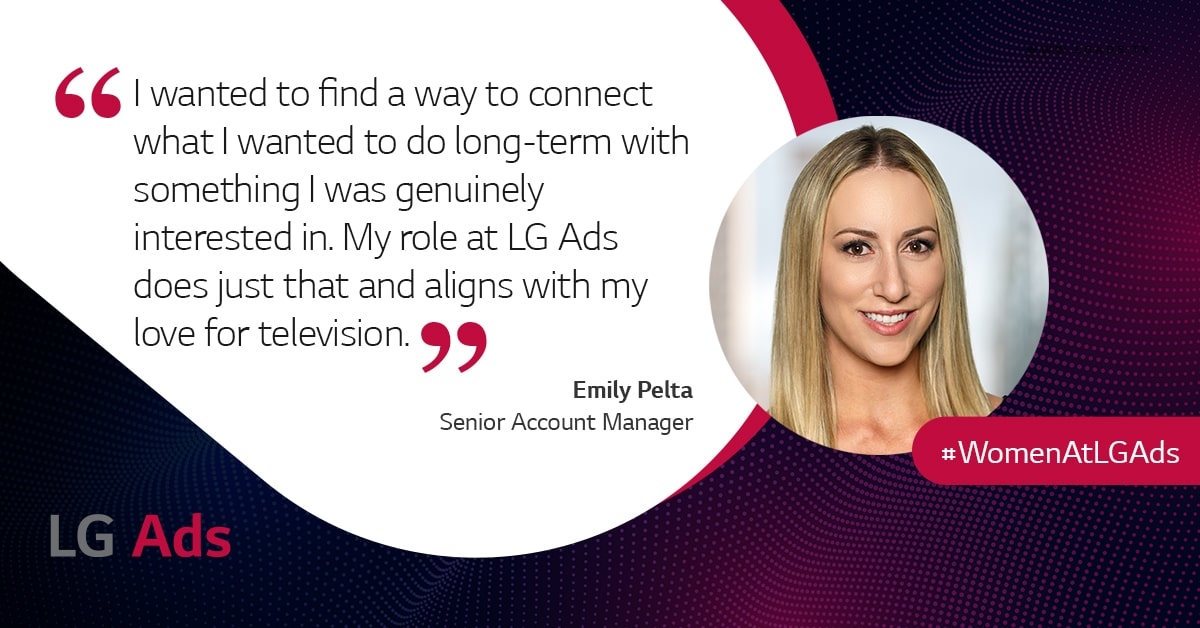 Senior Account Manager, Emily Pelta joined LG Ads earlier this year, and has already had a great impact on the team. Smart, passionate and a go-getter, Emily is an awesome addition to the LG Ads family and we are so glad to have her here. Here’s a little bit about her in her own words —

Tell us a little bit about yourself and what you were doing before you joined LG Ads.
Hi, I am Emily, Senior Account Manager at LG Ads. I started my career the traditional way: I began at a marketing agency, where I worked across a variety of verticals including entertainment, finance, consumer packaged goods, and more. I initially began my trajectory with direct response marketing, and eventually, my role evolved into the general media side of advertising. The agency route allowed me to gain experience across different media tactics, and ultimately, I fell in love with Advanced TV.

What made you decide to pursue this field?
I have always loved television and often joke that I was “binge watching” television before it was trendy. When I was growing up, my parents wouldn’t allow me to watch TV during the school week, so I would—I know I am aging myself here—video tape all of my favorite primetime shows and then binge the episodes I had missed over the weekend. I always knew I wanted a career in advertising, and I wanted to find a way to connect what I wanted to do long-term with something I was genuinely interested in. Naturally, my role at LG Ads does just that and aligns with my love for television.

What do you love most about your job/company?
What I love most is the people. While we are a new team, we all bonded very quickly and formed a “family”.

What is some advice you would give to women looking to get into advertising?
My advice would be –
Don’t be silent. Speak up. But don’t just speak to speak, speak with reason and conviction.