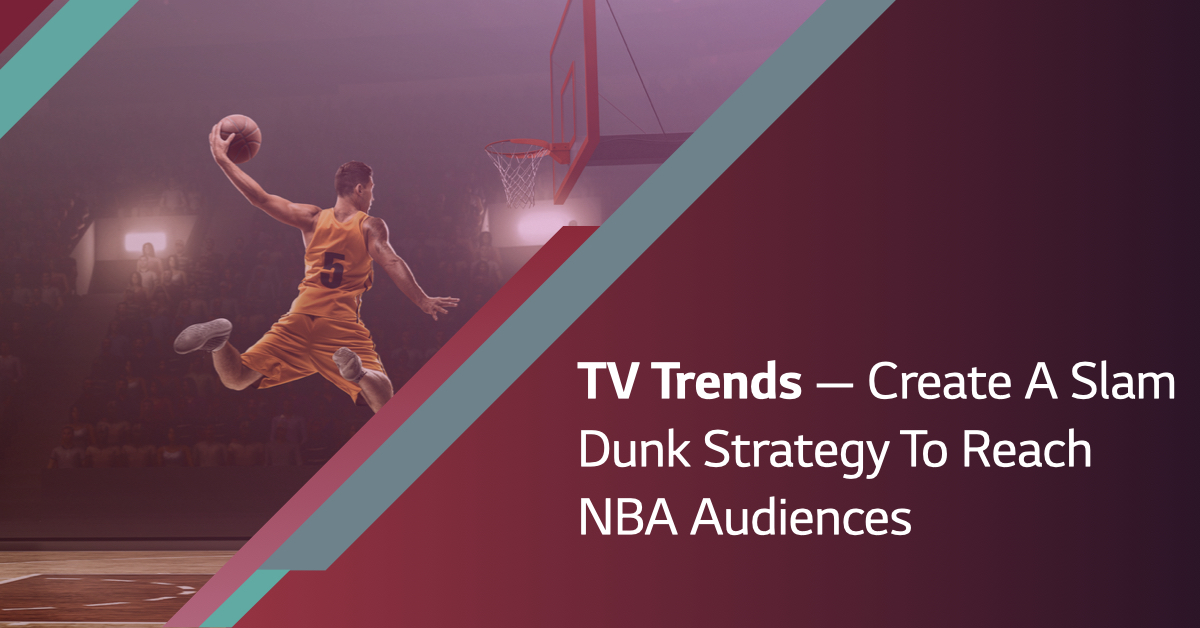 This year’s NBA playoffs ended just a few short weeks ago with the Golden State Warriors taking home the Championship trophy. While everyone now awaits the next season this October, we pulled together some data to better understand the trends around how TV audiences watch sports content, specifically NBA regular season games.

The top networks for viewers to watch NBA regular season games include NBA TV, ABC, ESPN and TNT. NBA TV televised the most games during the 2021-2022 regular season. However, the other networks (ESPN, ABC and TNT) outperform it in terms of viewership. 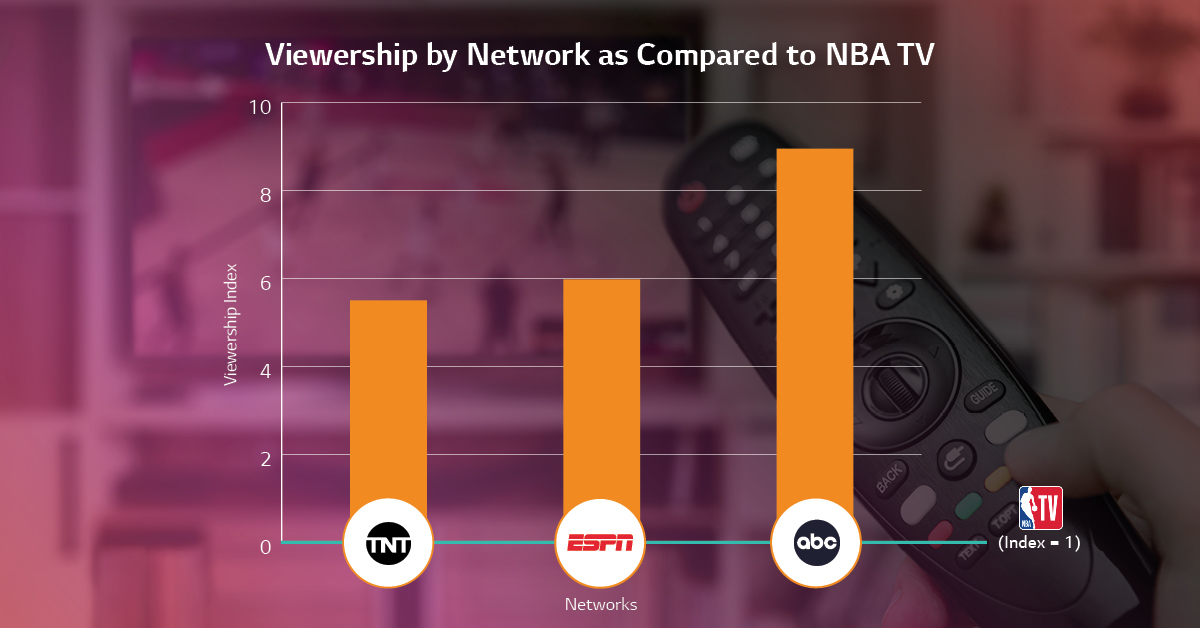 Well-known for their top players, impressive gameplays and heated rivalry, the Golden State Warriors and the LA Lakers are right on top in the rankings for ‘Top Teams’. Games featuring either of these teams or both see high audience viewership, attracting brands and subsequently, a high price tag. 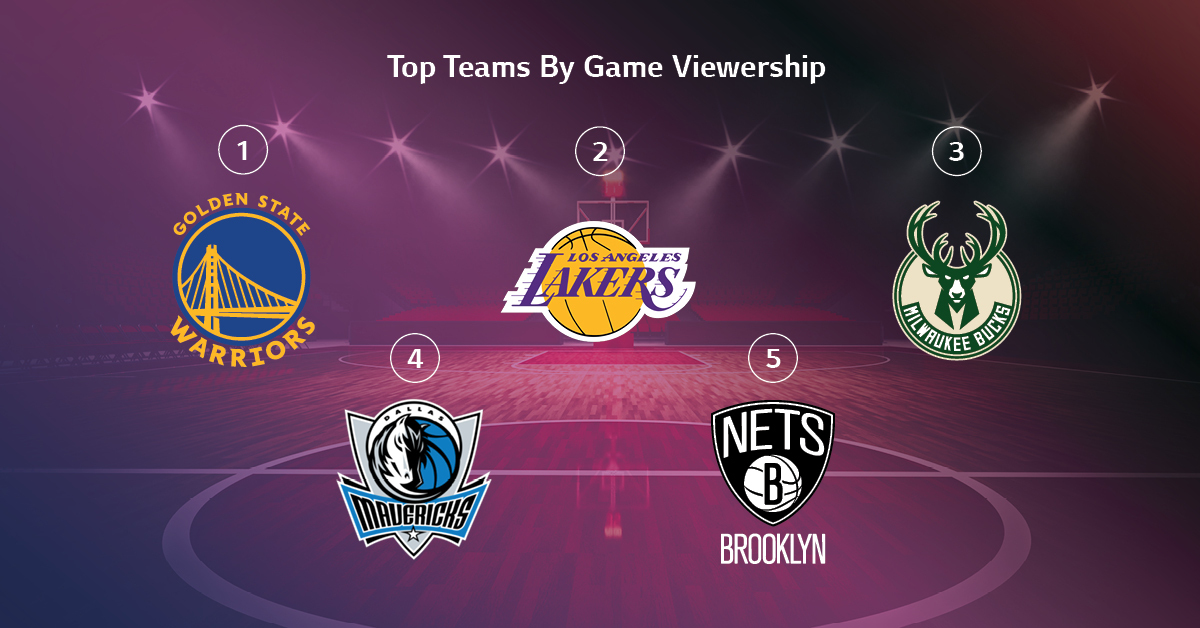 It’s A Slam Dunk For These Brands

State Farm, Google, Taco Bell, GEICO and T-Mobile win the position of top scorers for NBA ad slots during the regular season. However, the results are slightly different when we drill down to the leading advertising brands per network. One commonality is that most networks (TNT, ESPN and ABC), except NBA TV, have at least one insurance brand in their list of top 5 brands advertising during regular season NBA.

Drawing A Picture of Your Typical NBA Viewer

The NBA fan base consists of two major age groups — 25-34 and 60+. For brands looking to reach young adult audiences, families with young children, or older adults/retirees, NBA audiences are a safe bet. However, these audiences can also be found more inexpensively across other shows and networks. Apart from sports, top genres for NBA viewers include Games & Reality Shows, News and Movies. 17% of NBA audiences in LG Ad Solutions households are Hispanic, while 23% identify as African-American. Brands that engage with these diverse audiences and create campaigns that resonate with them will go a long way. The audience skews male with 66% of NBA fans falling in this gender bucket. NBA audiences are affluent with nearly two-third earning an annual income of over $75,000.

The 2022 NCAA Men’s Basketball Tournament was the top TV programming watched by NBA audiences. This is surprising because our previous research indicates that 40% of March Madness viewers did not tune in to an NBA game in the three months preceding the tournament. This suggests that NBA viewers watch multiple basketball formats, both professional and non-professional, while NCAA viewers are hardcore March Madness fans.

Almost half of NBA regular season viewers see streaming as an addition to linear TV. Two-thirds agree that they typically watch less than seven hours of live traditional TV a week. 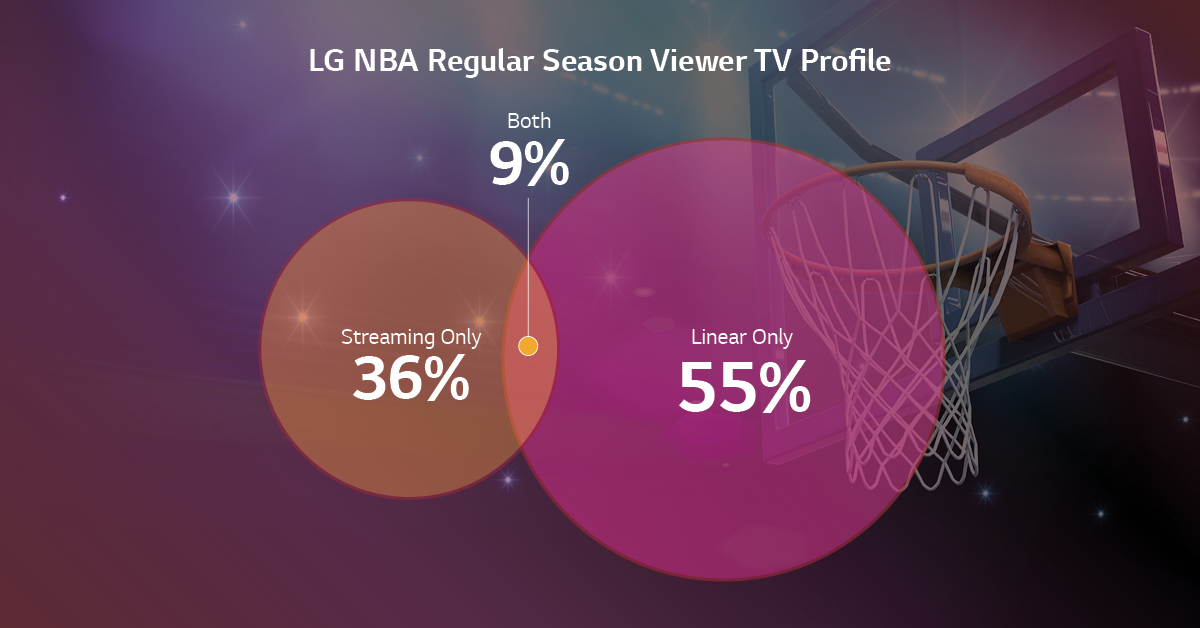 Over 80% of NBA regular season audiences use ad-supported TV apps while nearly two-thirds prefer streaming free video content with ads. NBA viewers believe ads placed in streaming content are more relevant (49%) and memorable (45%).This means that brands advertising on such channels or apps are likely to be placed in front of highly receptive and engaged viewers.

As a brand, the main aim is to win over audiences and create loyal customers. Making assumptions about who these audiences are and where their interests lie might result in an “air ball” or missed opportunity. Using LG Ad Solutions’ ACR data to target customers will improve ad relevance and, ultimately, conversions. Our premium CTV and native ad inventory across 30M+ US and 130M+ global addressable smart TVs can help you connect with audiences where they are most likely to take notice. To learn more, contact us at info@lgads.tv or on our contact page.

Note: All analyses carried out are based on national ad airings only