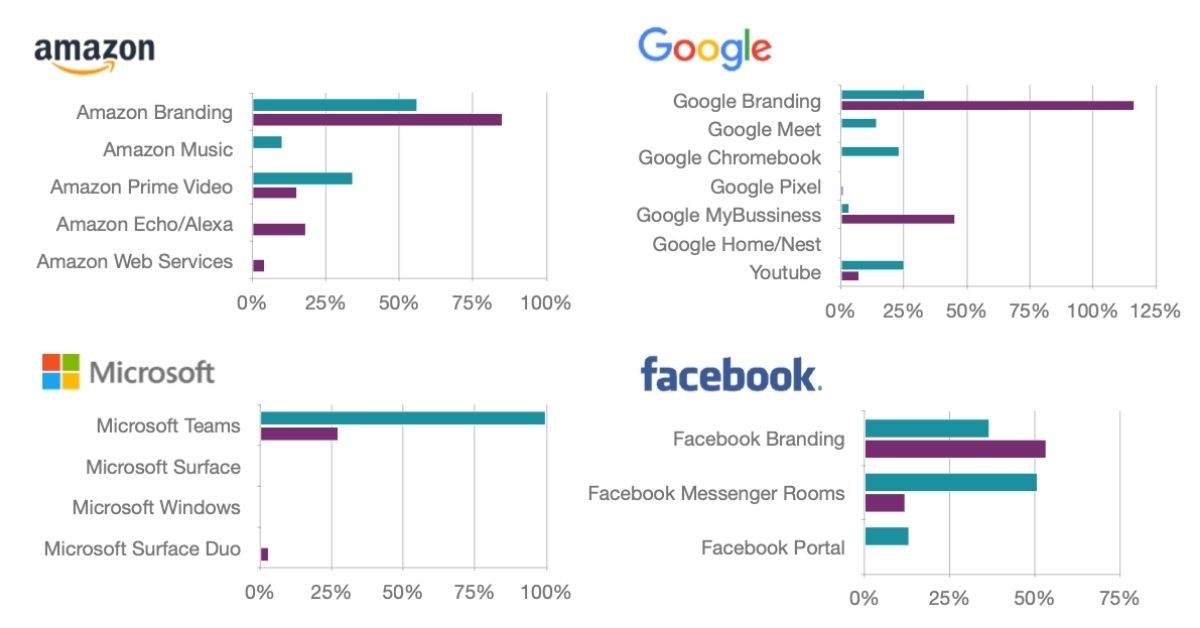 Our latest report analyzes the TV advertising trends for four technology and internet titans – Amazon, Facebook, Google and Microsoft – whose broad set of offerings overlap in multiple ways across the areas of search, services, computing personal devices, messaging and more.

In Q2 and Q3, insights from Alphonso’s 15 million smart TVs and connected TV devices show that Amazon dramatically outspent the other three tech giants combined by 73%. And quarter-over-quarter, Microsoft decreased its TV spend by roughly 70%. 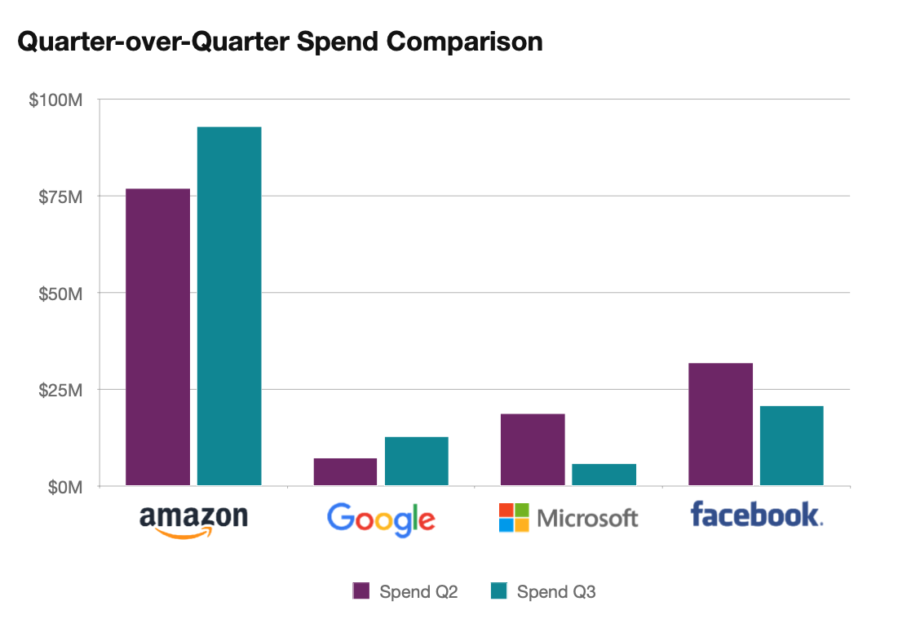 Looking at TV spend by week, Microsoft had almost no spend during the Summer months after the pause of its Teams awareness campaign at the end of May. 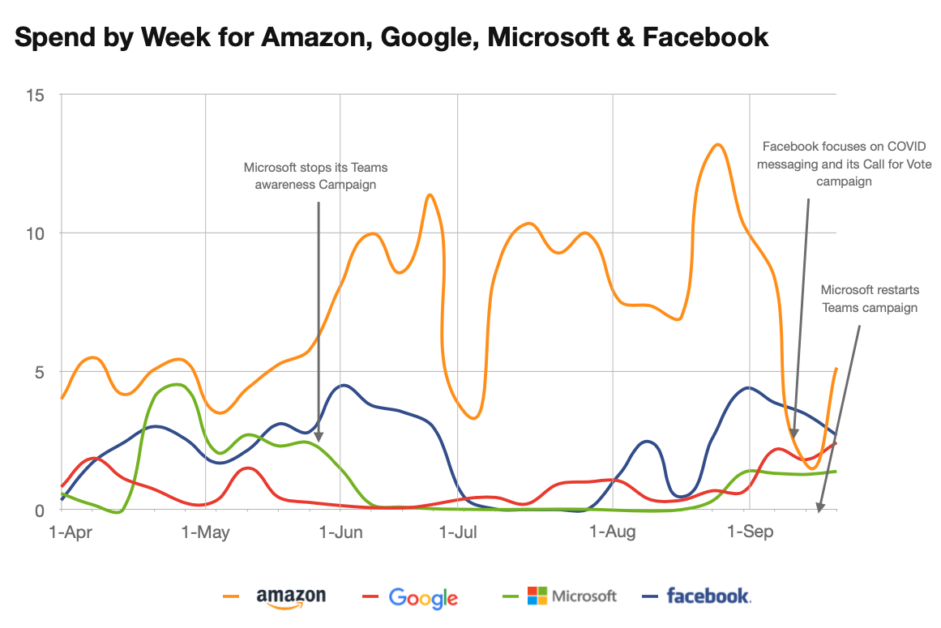 Breaking down the content of the top tech brands’ TV ads, Amazon spent a significant share of their TV ad budget on branding – much of that focused this year on its initiative to become net zero in their carbon footprint, and how they keep their warehouses safe during the pandemic.

Google’s branding ads focused on how they help connect with local businesses better, while Facebook focused on ads that show how people are able to do more when they come (virtually) together during the pandemic, a theme that is consistent with the company’s mission statement. 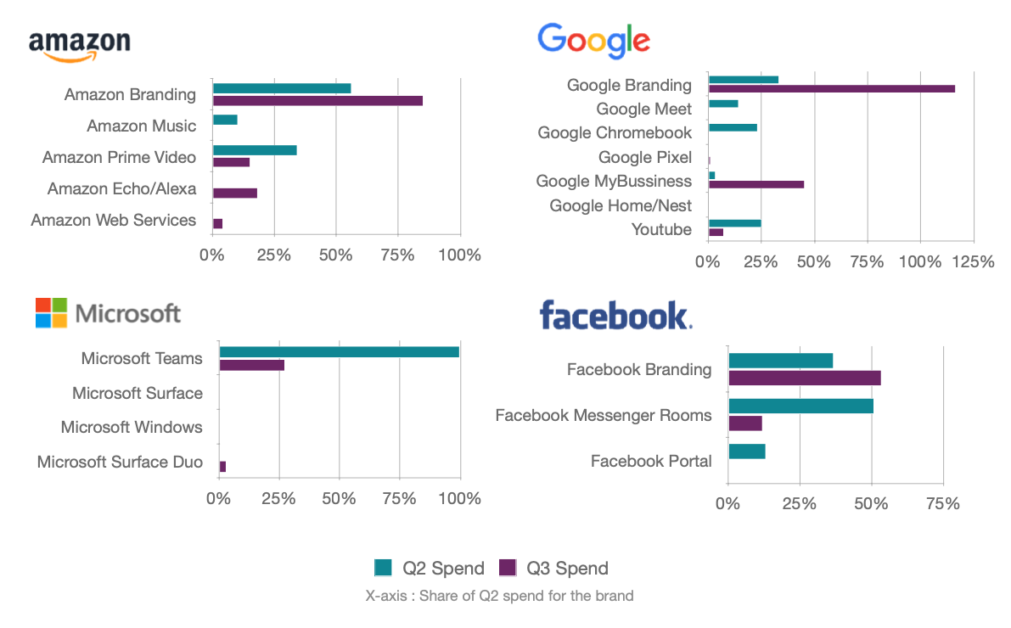 Alternatively, Microsoft focused only on products, including Microsoft Teams and Microsoft Surface, during this time.

When comparing Amazon and Google’s TV ad spend for their product launches, Amazon’s TV ad spend dwarfed that of Google (Home and Nest) for the new generations of the Echo and Alexa (mostly during the restart of live NBA games). Overall, in Q3, Amazon invested $13.9M for Echo TV campaigns, which is far above any other smart speaker brand.

In Q2, Google outspent Microsoft for the promotion of its Chromebook ($1.7 million Chromebook vs. $36,500 Surface) but stopped in Q3. Instead, Microsoft Surface jump-started its spending with live NFL Football in Q3 ($107,600 Surface vs. $0 Chromebook).

For the launch of its foldable mobile device, Surface Duo, Microsoft spent $550,000 on TV in Q3 – primarily around NFL Football for its first campaign. Then, Microsoft focused on Prime Time and Late Fringe only, whereas Google ran its Pixel campaigns more on Early Morning and Late Fringe, as well as Prime Time. 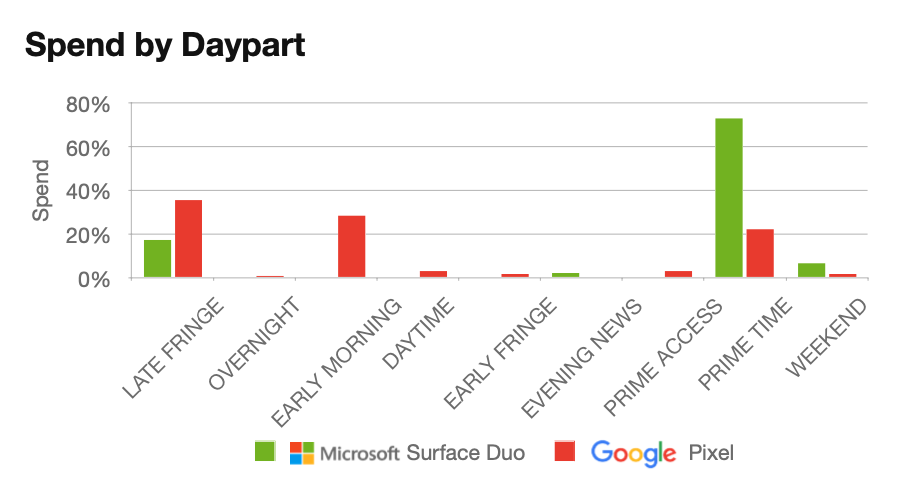 The pandemic was a great opportunity for video conferencing apps, and Microsoft Teams outspent both Facebook Rooms and Google Meet during this period.

Microsoft Teams was also made available for personal use in June; Google Meet did this later but didn’t invest on TV with that message. Rather, Google followed up with a TV campaign targeting usage among friends and families stating late Q3. Reportedly this increased active Google Meet users by around 50% by the end of October 2020.

All three brands focused on Prime Time, Late Fringe, and Early Morning slots for their ads, while Meet and a much larger share of spend in Evening News. Teams, Meet, and Messenger all saw over half their TV spend (70%, 55%, and 60% respectively) go to Prime Time programming.

For a complete look at the findings, download our report today.